Worthy son of Poitou, Mathurin is a brave;
Rebel without fear, with nothing to stop him
He left his village a spring morning
With a light step and deaf to the cries of his parents.

In La Rochelle, the port, awaits the great ship
Rigged by King Louis to expand his empire.
Dreaming of new land he embarks merry
And to his dear country made his last farewell.

The crossing is long: the caravel frail
Tossed by the winds in the rain trickling
Thanks to the skill of valiant sailors
Brave the vast sea and the blue fury.

Then a good day off appear the coasts
Of a river unparalleled bordered by tall forests
Like goliaths: as far as we can see
A famous sight move the soul…

Quebec, Quebec finally! At the bottom of the cliff
A good-people, strong, brave and filled with joy
Welcomes with joy the new arrivals
In great hugs and sharp embraces.

At that time, Quebec is but one big family,
And soon while passing it more than one girl
Turns a clear eye and a charming smile …
But he awaits the one who will win his heart.

A night at the vigil cames Marie Mésange
Radiant she lights the place like an angel.
Mathurin is seduced and asks for her hand.
Ah! Why could he not marry her tomorrow!

It was at Château-Richer where he rented a farm
That he settled toiling a whole five years.
Then in middle of the river, at the Île d’Orléans,
He builds his house to thay with his children.

The land is good … He cleared, plowed and sown.
The family grows baptism after baptism:
Adults they are all when the century ends.
Mary is gone, then Mathurin follows.

In Quebec and across their offspring is vast;
From their blood we form a new caste.
And thanks to those two giants, our name
Enjoys in this country an eternal fame. 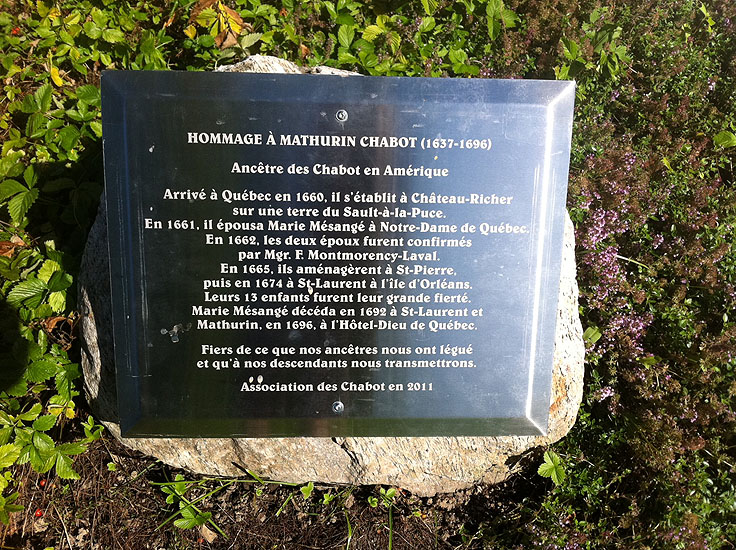