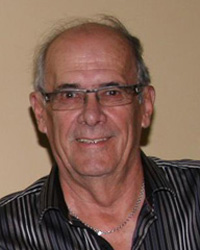 Born in 1944, in Québec, son of Marcellin Chabot and Jeannette Plamondon.

I was born in Quebec City on February 10, 1944 and baptized in St-Malo parish, son of Marcellin Chabot and Jeannette Plamondon of the parish of St-Sauveur.

My grandparents were Michel Chabot and Cordélia Auger, as well as Charles Plamondon and Élisabeth Trudel.

I started my career as a professional firefighter with the Canadian Forces, specifically with the Air Force.

When I left the Forces, I worked at Pratt and Whitney in Longueuil as a firefighter, before joining the fire department of the city of Longueuil.

I graduated from École Polytechnique de Montréal as a fire protection and safety technician in 1969.

I finished my career in 1999 as an officer responsible for training and special projects. From 1985 to 2012, I taught for IPÎQ, the Collège ND de Foy and the National de Pompiers du Québec (the provincial firefighter school). I gave the fire training in English in the towns and villages along the US border and on the lower North Shore until February 2012.

I served on the boards of directors of the firefighters’ association of Quebec as secretary – treasurer for a 2-year term.

I volunteered for Scouts in Quebec, as a troop leader, for a troop I founded in ND de Fatima Parish, in Longueuil, and in St-Mathias-sur-Richelieu, and was District Scouts Commissioner for the St-Jean district.

Member of the Chabot Association since 2007.